C.T. Thomas plays incidental melodies from the Syriac era, on his violin. 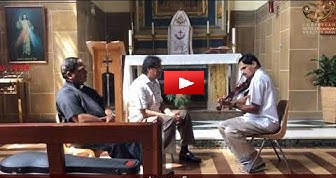 AP 124 - C.T. Thomas plays incidental melodies from the Syriac era, on his violin.

C.T. Thomas plays incidental melodies from the Syriac era, on his violin

The melodies of the solemn Qurbana of the Syro Malabar Church is a case in point for inter and intracultural communications in Kerala over an extended period. We see in this video several examples of such melodies. The melodies that C. T. Thomas Chavarappuzha plays on violin in this video are not part of the liturgy. The leader of the Syriac choir chose the tunes from such different sources as South Indian classical music, film music or favorite devotional songs. The performance context of the melodies ranges from an overture-like introduction before the Qurbana, distribution of communion, or any period of silence that extends more a minute. The tunes are referred to in Malayalam as “lissam,” which may have derived from two English words “listen” or “lesson.” The performers learn these melodies from their teachers through a trial and error method. The use of notation, Western or Indian, was extremely rare. Each performer has his repertoire of tunes that he cherishes as private property. We are grateful to C. T. Thomas for performing these melodies on his violin. Incidental music during Syriac Qurbana could be a subject matter for further studies. Thomas could not give more details on the melodies. We look forward to comments from informed viewers regarding the sources of these tunes. The tunes do not show resemblances to traditional Syriac melodies from Qurbana or the Hours. Probably, these are secular tunes that the musicians knew and were comfortable to play. Interestingly, this was an example of the interface of the sacred and the secular. Musicians were comfortable with playing secular tunes during Syriac Qurbana. During my stay in England, Dr. Martin Antony decided to introduce me to Fr. Jose Anchanickal who also serves the Syro Malabar immigrant community in the Bristol area. When Fr. Anjanickal came to know about my mission of preserving Syriac music, he mentioned the name of C. T. Thoms who was visiting his son. Fr. Anjanickal immediately contacted the son of Thomas and arranged this recording inside St. Agnes Church.