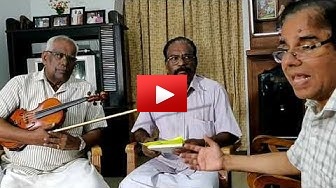 Note This interview captures rare melodies and memories from two Syriac Church musicians who have been active for over sixty years. Even after vernacularization of the Syro Malabar liturgy, Papootty master and Benedy Anikkad have been singing and playing for solemn Qurbana in Syriac. During this interview, Papootty master and Benedy sang several melodies that are known only to them. They learned these melodies from late Fr. George Nellikkat. Fr. Nellikkatt taught them the songs that the Syriac choir used to sing at St. Joseph’s Seminary at Mangalappuzha, Aluva. The St. Joseph’s seminary was a place of significant Syriac music activity in the first half of the twentieth century. Fr. Mathew Vadakel, a singer, professor, scholar of the Syriac language and composer of Syriac melodies, was active at the Seminary during this period. Fr. Paul Kodamullil mentioned Fr. Vadakel’s name during our interview ( see Aramaic Project-3). The melody of Laku mara and Qandisa alaha that Fr. Paul sings is the same as that we hear in this video. Fr. Paul attributed those melodies to Fr. Mathew Vadakel. We are grateful to Papootty Master and Benedy for sitting through a lengthy interview. Because of the length of the interview, we thought it convenient to publish it in two parts. See the second part at Aramaic Project-139 . We wish Papootty Master and Benedy many more active years to serve the Syro Malabar Church.