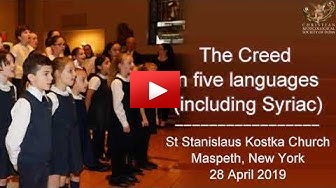 The sound and melodies of Syriac chants from the Syro Malabar Church are becoming a part of the religious experience of Americans. The parishioners welcomed the idea of celebrating my anniversary with Syro Malabar Qurbana in English. They welcomed my suggestion to add a Syriac element to the Qurbana. They enthusiastically learned the melodies. This was a new experience for the choir as well as the congregation. One participant commented that she felt as though she was in Israel. Incidentally, it was during my trip to the Holy Land that I got the inspiration to resucitate the East Syriac language and melodies of the Syro Malabar Church. The Parishioners of St. Stanislaus Kostka initially funded the Aramaic Project whcih took a life of its own. Seven years later, the Project is in full swing. I take this opportunity to express my gratitude to the parishioners and all who have been supporting this project