A plea to retain the Pesaha meal at home, not church. 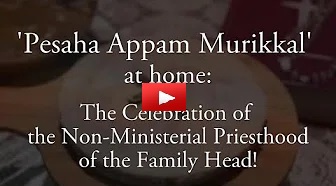 A plea to retain the Pesaha meal at home, not church

The Syro Malabar Catholics continue to observe many Jewish traditions from the Old Testament times. The observance of the Pesaha appam murikkal (breaking of the Passover bread) is one such tradition. The ritual takes place at home on the eve of Holy Thursday, which is referred to in Malayalam as “Pesaha wyazham” (“Passover Thursday”). The Aramaic/Hebrew word, “Pesaha,” has been adopted into the Malayalam vocabulary. Extensive preparations start in the morning with the baking of unleavened bread and a concoction made out of coconut milk. There is an air of sacredness floating around the family during the entire day. The sense of sacrality is so deep that it makes a strong impression on the minds of children. Conversations among the family members are in tune with the sacredness of the day. After sunset, the family gathers at the family prayer room, which assumes an extra sense of sacredness. One of the family members lights the lamp as usual for the daily family prayer. The oldest male member acts almost like a priest. He explains the meaning of the special day and the special event. It is an occasion to acknowledge the non-ministerial priesthood of the head of the family. After customary prayers, the oldest male member breaks the bread and gives a piece to each member of the family, starting from the oldest to the youngest. And then, he gives the concoction in a cup or glass. The members receive the bread (appam) and the concoction (pal = milk) with as much reverence as they would at the reception of holy communion at the local church. In the recent past, priests began to incorporate this ceremony to the Holy Thursday observance in the church. It took away the family context of the ceremony and the role of the oldest male member of the family. Such a practice may be disruptive to the original sense of the ceremony, which gave importance to the family as a sacred place and the head of the family also as a religious leader. We hope the conversation in this video inspires the viewers to start a movement toward bringing back the ceremony to the family. We welcome comments from the viewers.