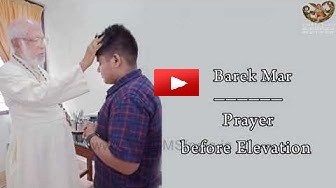 Here is a teenage singer who has already warmed up to the Syriac heritage of the Syro Malabar Church. Unusual as it is, Denny is attracted to the melodies and moods of East-Syriac chants and learned them by listening to Youtube videos. During a phone conversation, Denny, member of the Eparchy of Palakkad in Northern Kerala, acknowledged that he is an avid user of the postings on the Aramaic Project videos on our channel. Denny uses the Malayalam transliteration of the Syriac texts. Surprisingly, his rendering of the words is very satisfactory. The melodic variation at the end of “Lad hassi” (4:18) is noteworthy. It is reminiscent of the performance practice of Rag Bharavi in Hindustani music.

Denny’s interest caught the attention of the Major Archiepiscopal Curia at Mount St. Thomas. The priests there introduced Denny to the Major Archbishop, Cardinal George Alencherry, who showed interest in listening to Denny. The Cardinal, as well as the priests, seem to enjoy the singing by this Syriac prodigy. We look forward to hearing more melodies in the voice of Denny soon.