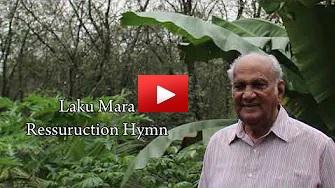 We are indeed fortunate to have this recording of Solemn Qurbana by Fr. Paul Kodamullil (d. 2019). This is one of the very few recordings available of the pre-1962 version of the solemn Qurbana. Fr. Kodamullil was a celebrated singer, who was gifted with a powerful and resonant voice. His vocal style is reminiscent of the pre-amplification era when singers had to reach out to large audiences without the aid of a microphone or acoustic amphitheaters. During his active years, Fr. Kodamullil used to be sought after to be the celebrant at solemn sung mass during parish festivals. This recording was originally published on a pre-recorded cassette. The digital transfer has adversely affected the speed of performance and, consequently, the quality of voice. We can hear Fr. Kodamullil's live voice in Aramaic Project-3. The short introduction In this recording gives us a glimpse of Fr. Kodamullil's speaking voice. [From the note on Aramaic Project-3 Fr. Kodamullil was a living link to a unique period of time (the 1950s) and place (St. Joseph’s Pontifical Seminary at Mangalapuzha, Aluva) in the history of the Syriac chants in India. During this period, we see an unusual convergence of great and diverse musical talents and heightened musical activity at St. Joseph’s Seminary; Fr. Mathew Vadakel, an excellent singer and composer of Syriac chants, served as a professor. In this video, we hear the solemn melody of the Resurrection Hymn in Syriac, “Lāku mārā,” (To You O Lord) that Fr. Vadakel composed. Fr. Aurelius, OCD, a Carmelite from Spain and an expert in Western art music, was the music director and organist. The Seminary owned a huge pipe organ, probably the only one of its kind in India. Fr. Vadakel and Fr. Aurelius collaborated in publishing the musical notation (staff notation) of the solemn high mass in Syriac in 1954: kērala kaldāya suriyāni rīthile thirukkarma gīthangal (Liturgical songs of the Chaldeo-Syrian Rite of Kerala). The text layout is in the Malayalam script. The first part of the book contains a lesson plan in Malayalam to learn staff notation and western art music in general. The book was published by S. H. League, the publishing wing of the Seminary. Fr. Kodamullil was lucky to have had such great mentors. As choirmaster of the Seminary for seven years, he also had opportunities to interact closely with Fr. Vadakel and Fr. Aurelius in making decisions on the musical choices for the liturgical celebrations and the performances of the official Syriac Choir at the Seminary. A group photo from 1958 that is in the cherished possession of Fr. Kodamullil is the source for the images of Fr. Vadakel and Fr. Aurelius shown on this video. One can only imagine the sonic heaven created by the solemn Syriac melodies in the voices of such gifted singers to the accompaniment of the majestic sound of the pipe organ. That could not have happened anywhere else in the world. We are grateful to Babu Puthumana for sharing this recording with us and granting permission to post it on our channel.