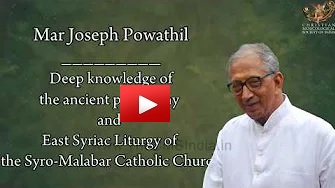 It was indeed an honor to have a conversation with retired Archbishop Mar Joseph Powathil, a valiant son of the Syro Malabar Church. Mar Powathil spent the formative years in a multi-ritual context in Pune, where there was not much opportunity to master the nuances of the Syriac language. The Seminarians learned enough to celebrate Qurbana and the Hours. Mar Powathil’s interest in the Syriac heritage evolved out of a need to understate and explain his identity in a multi-ritual setting. A study of the historical trajectories that led to the Synod of Diamper became a turning point in Mar Powathil’s life. From then onwards, it was a life-long mission to understand and uphold the unique identity of the Syro Malabar Church among all other Christian churches in India. In the process, Mar Powathil emerged as a spokesperson for not only the Syro Malabar Church but also for the St. Thomas Christians and South Indian Christianity itself. We are grateful to Mar Powathil for allowing this recorded conversation and pray that God grants him health to serve the church for many more years.