Qandisa with Coda. The Pulikottil Priests (1970) 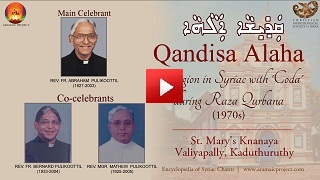 This video adds to a series of earlier videos (252 A to E) on the performance practices of the Trisagion in Syriac. The Syriac generation treated Qandisa Alaha differently from other Syriac chants. The celebrants and church choirs took the freedom to add several musical elements to the chant. One such element is the coda after the third iteration of the text. In this particular case, the coda replaces the third iteration of the chant; it is in the form of a call-response style between the celebrant and the choir. The choir concludes the chant by adding the invocation of the deacon for prayer and peace. The melody is traditional.

The celebrants are three musically gifted brother-priests from the Knanaya community among the St. Thomas Catholics in Kerala. The brother-priests come from the Pulikkottil family. We plan to add the video of the entire Qurbana to the library soon.

So far, this is one of the earliest recordings of a Syriac chant in our digital library. We are immensely grateful to Mathew Mammoottil for preserving this video from the early 1970s and permitting us to archive it in our library.