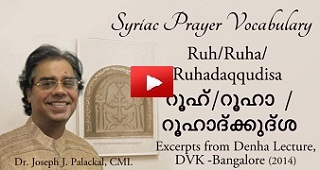 "Now, let us turn to some not-so-good news. Forty-two years after the Syriac liturgy was translated into Malayalam, we are still struggling to transfer the Aramaic way of thinking into the vernacular. This requires the transference of ideas and concepts that originated in the cultural context of a particular people in West Asia to the people who went through a different history in South India. Therefore, it is time to delve deep into the roots of the problem of transferring a way of thinking, as opposed to translating words from one language to another, from one cultural setting to another. Let us examine a few words in the prayer vocabulary of the Syro Malabar Catholics. The prayer vocabulary is the common man’s encyclopedia of theology. What I will try to do for the next few minutes is to show how we have failed to transfer the Aramaic way of thinking into the vernacular by highlighting certain Syriac words and expressions that were disregarded during the process of translating the liturgical texts. I would like to argue in favor of adopting some of those words and terms into the vernacular. You are completely free to disagree with me; such disagreements can only be beneficial for the ongoing discourse on our heritage.

In every language there are words that define themselves by their sounds, i. e., the sound of the word itself is its meaning. Such words emerge out of the communal wisdom of the speakers of a language accumulated over an extended period of time. Usually, these words are understood in exactly the same way by all the speakers of the same language across the board. The most familiar example from India is the Sanskrit term, santhi. The very utterance of the word creates the effect and the affect. It is understood by the listener instantly; interpretations are unnecessary. One such example from the Aramaic lexicon is the word ru?, which literally means “breath.” The utterance of this word requires a special use of air and energy that explicates the meaning. Ru? is pre-language, even pre-word; it is pre-OM. Ruh is the raw material with which words and meanings are constructed. In the beginning, was the ru?, ru? was with God, ru? was God (do not worry, I just made that up!). Our Tamil-speaking forefathers in Kerala adopted the word Ruha into their prayer vocabulary. Even after Syriac literacy declined considerably, they retained this word. Our parents’ generation said the minor doxology as Bawakkum puth?anum ruhadaqqudisakkum sthuthiyayrikka??e. They did not try to translate ruha into Tamil. In the 1960s, however, the word ruh was translated as atmaw (meaning, “soul,” that which sustains life) or arupi (“that which is formless”). Thus, currently, we say the minor doxology as Pithawinum puth?anum parisudhatmawinum sthuthi. Both words, atmaw and arupi are insufficient to convey the original sense of the word ru? or ruhâ; both words lack the magic that comes from the combination of sound and sense. The first is a synonym, the second is a derivative. One might wonder whether our forefathers were smarter than the members of our liturgical committee.

An example from the lyrics of a Malayalam movie song by a famous poet might support this argument. Shri Vayalar Rama Varma (1928-1975) wrote a Christian prayer song for the film, Makane Ninakkuwen?i. The song starts with the minor doxology, Glory be to the Father, the Son, and the Holy Spirit. The song starts thus: Bawakkum puthranum parisudha ruhakkum sthuthiyayirikkatte, eppozhum sthuthiyayirikkatte. Mr. G. Devarajan (1924-2006) composed the melody, which was recorded in the voice of P. Susheela. Shri Vayalar, a Hindu, was well versed in the Christian folklore of Kerala. The film was released in 1971, nine years after the Syro Malabar Church translated the liturgy into Malayalam. The minor doxology, by that time, was already on the lips of every Catholic in Kerala as 'Pitawinum puthranum parisudhatmawinum sthuthi'. Instead of following the popular version, Shri Vayalar decided to retain the Aramaic word ru?â. Both words 'parisudhatmaw' and 'parisudharupi' would have been a perfect fit to the melody. Vayalar knew, however, that both 'atmaw' and 'arupi' had accumulated different connotations, and might detract the listeners from the sense of the original Aramaic word ru?â. He knew that words carried not only particular meanings, but also collective memories of the speakers of the language. In retrospect, one can only appreciate the wisdom of Shri Vayalar Rama Varma.