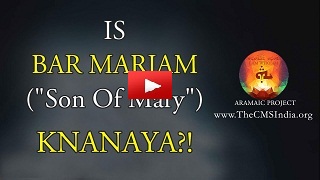 Congratulations , dear Palackal Yawsep Kathanar for bringing in that much needed clarity on 'Bar Mariyam'............ - Amel Antony - May,2022

Congratulations , dear Palackal Yawsep Kathanar for bringing in that much needed clarity on 'Bar Mariyam'. It is evident that the text goes back to 16th century and the reasons for Bar Mariyam losing popularity among the Northists is something that requires further research . At the same time, it is not surprising that those who have been claiming exclusive ownership over 'Bar Mariyam' are raising objections. I don't think that there is an an attempt to snatch away this beautiful hymn from Southists- instead we all should welcome and be glad that the Hymn belongs to the common heritage of East Syriac Churches. Reviving Syriac is a noble yet thankless endeavour and in the process , it is imperative that we do some re reading and relook into claims that have assumed mythical proportions. I am sure that Palackal Yawsep Kathanar will keep striving for the restoration of Aramaic/ Syriac ( the results are already felt with the increasing number of Youtube videos and the rising demand for Syriac Hymns and Sung Syriac Qurbana ) and May Alaha continue to shower His blessings upon him. - Amel Antony - May,2022

Dear Fr. Palackal - We had been looking forward to this video for some months now. ......Knanaya Cultural Foundation - May, 2022

We had been looking forward to this video for some months now. Unfortunately we are left rather disappointed. As you may remember we had left a comment a few month prior on another video uploaded on your channel. (See: Wilson Muryadan interview published on 18/6/20).

We are perplexed as to why none of the above points have been addressed in this response video. No new information/evidence has been presented here. We were already well aware of the fact that Bar Mariam is found in the Khudra of the Chaldean Church published by Paul Bedjan. PU Lucas himself was aware of this fact and he has included a footnote about it in the original edition of Purathanapattukal published in 1910.

All you have shown in this video is that the melody commonly associated with Bar Mariam is found in some other hymns present in Kerala. There is nothing shocking about this as not every hymn requires it’s own unique melody. The melodies themselves have evolved over time. The melodies present in the Malabar church are different from that of the Parent church in Iraq, which have clearly been influenced by later Arabic tunes. Even the Assyrian priest Fr. Antony Kaitharan in the above video has used a different melody of unknown origin.

The question here is not about the melody, The cause of concern is solely regarding  the TEXT of the hymn and the TIME and PLACE of its use. None of which has been addressed in this video. In the interests of time we feel it best to list each points/question so that you may address them individually.

1. is there any textual evidence for the use of Bar Mariam during the Feast of Yalda and Denha in KERALA based on the Malabar Breviaries published in 1862 and 1876 by Fr. Chavara?
2. Can this hymn be found in the handwritten Wedding Taksa published by the CMI fathers from Thrissur in 1861? Can it be found in any other wedding Taksa that you are aware of?
3. If the answer to the above questions are ‘NO’, then it would mean that the oldest textual evidence extant in Kerala for Bar Mariam is provided by the Knanaya priest PU Lucas in 1910 who clearly states it was used exclusively for Knanaya weddings.
4. Is the text published by PU Lucas identical to that of Paul Bedjan? Have you compared the text to other older Khudras published in recent years?
5. Bedjan has mentioned the Hymn as a narrative of the Nativity of Christ. The Knanaya version published by PU Lucas also contains verses on many other subsequent events in the Life of Christ Jesus. Are these verses also found in the Bedjan text?
6. Historically, Syro Malabar writers like Fr. Joseph Kurmankan had criticized the Knanaya usage of the hymn at weddings as being liturgically improper. What are your thoughts on this matter?
7. The testimony of Fr. Joseph Kurmankan in 1944 suggests that singing this Hymn for weddings was a Knanaya tradition. If so, can the current attempts by you and others like Fr Cyril Thayil to incorporate this hymn into the Syro malabar wedding ceremony be considered as a “restoration”? Or is it rather a recent imitation of a Knanaya custom that was previously criticized?
8. If this hymn was as widespread and popular among Syro malabar Catholics as you claim, why is there such a paucity of textual evidence for its use in Malabar outside of PU Lucas text?
9. Why has Fr. Placid Podipara a syriac Scholar and famed liturgist mentioned Bar Mariam only as a Knanaya wedding hymn? Do you believe that he deliberately omitted its wider use among the Non-Knanaya Syro malabar Catholics? If so, for what purpose? as he himself is a non-Knanaya and well versed in the traditions of his church.
10. In your own researches you relied on the CMI archives of mannanam for the text of many other syriac hymns, with the notable exception of Bar Mariam for which you relied on PU Lucas’s 1910 publication. Why were you not able to locate the Bar Mariam text at the CMI archives of Mannanam?

We sincerely hope that you can respond to the above questions in an honest and straight forward manner, Including a numbered response to each listed point.

Of course we are always open to changing our stance in light of new evidence. But remember that the burden of proof lies with you!

Knanaya Cultural Foundation - May,2022
Dear Father, I do appreciate your passion and love for the Syriac language. ......Simon Stephen - May,2022

Dear Father, I do appreciate your passion and love for the Syriac language, but I do suggest you make a proper and detailed research  about Knanaya history. Because Baru Mariyum in written form was first found in "Ancient Songs" of P. U Lukas, a Knanaya work. This is the Patrimony of the Knanaya. How can  the Mar Thoma Christans forget it is patrimony "Baru Mariyam" and only Knanaya people retain it. It is because this song is of the knanaya people. It is not a knanaya agenda. Please do make a detailed study before saying anything in public. Cultural appropriation takes place when members of a majority group adopt cultural elements of a minority group in an exploitative, disrespectful or stereotypical way.  Appreciation is when someone  seeks to understand and learn about another culture to broaden their perspective and connect with others cross culturally. Appropriation on the other hand is simply taking one aspect of a culture that is not your own and using it for your own personal interest.
The reality is that this priest is posted in America with support, encouragement, and funding from Syro Malabar Churches across USA & India for his activities at large. if you are a Knanaya Community member supporting the Syro Malabar Church, you are also participating this act of crime against Knanaya Community. - Simon Stephen - May,2022