What? Sankaracharya, a crypto Nazrani? 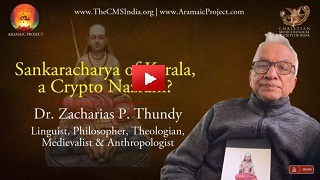 AP 290 - What? Sankaracharya, a crypto Nazrani?

Prof. Zacharias Thundy once again challenges the status quo on the scholarship on early Christianity in India. This time, Dr. Thundy reexamines the story of Sankaracharya, a venerated Hindu philosopher and theologian from Kerala who lived in the eighth century. Dr. Thundy argues in favor of a Christian connection by using the theology of the fourth Gospel, which he thinks was initially written in Aramaic, probably by Thomas the Apostle. In the video, we see a summary of the arguments that he earlier published in his book, "Sankaravatara Mystery Resolved. Where as ….” The book is available on Amazon. The arguments may not sit well with contemporary scholars. In any case, Prof. Thundy’s challenge to revisit the religious history of Kerala remains. Thundy's way of thinking hints at the possibility of an Indian Nazrani theology and a new way of reading the fourth Gospel. We welcome contradictory opinions by informed scholars in the Comments section.