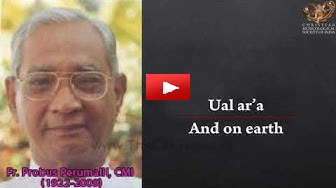 This recording is a musical treasure and valuable addition to our Aramaic Project archive. It can serve as a reference point for historians of Syriac liturgy, Indian Christianity, and Kerala culture. Also, the recording contains a vast body of melodies and several examples of performance practices that can be a resource for musicologists who work on inter and intra-cultural musical borrowings. What we have here is a pre-1962 version of the solemn Qurbana in Syriac, which contains the Syriac translation of a few chants borrowed from the Roman Catholic (Latin) tradition. It is possible that Bishop Francis Roz, S. J. (1559-1624) mediated this inter-ritual borrowing, after the Synod of Udayamperoor (1599). Some of the melodies use rhythmic patterns that are popular in South Indian classical music; this may indicate that someone in Kerala composed these melodies. If that be the case, these melodies should find a place in the academic discourse on Indian and Indian Christian music.

Fr. Probus Perumalil (1922-2009) made this recording sometime in the 1970s, in the context of a dry mass that he celebrated at the private chapel of St. Joseph’s Monastery at Mannanam, in the Kottayam district of Kerala. St. Joseph’s Monastery (est. 1831) is the mother house of the Carmelites of Immaculate (CMI). It was on the premises of this Monastery that Saint Kuriakose Elias Chavara (1805-1871), the protégé of the saintly Palackal Thoma Malpan (1780-1841; my collateral ancestor) established the first printing press in Kerala with facilities to print East-Syriac texts. Subsequently, the CMI priests and lay-brothers played a significant role in preserving the Syriac heritage of the Syro Malabar Church. Fr. Probus Perumalil, CMI (1922-2009), a gifted singer of Syriac chants, took the initiative to make this recording with the help of the church musicians of St. Joseph’s Monastery. Fr. Probus, who grew up in the Syriac tradition, had a unique vocal inflection of the Syriac texts and melodies that resulted from the extended use of the language from his early formative years. The recording also represents the CMI style of singing Syriac chants, which, the diocesan priests in Kerala would characterize as stylistically different from theirs. Even after the vernacularization of the Syro Malabar liturgy (1962), Fr. Probus continued to be a well-sought-after celebrant of solemn Syriac Qurbana on such special occasions as the celebration of the principal feast of the patron saint of Syro Malabar parishes, mostly in the southern parts of Kerala.

I got acquainted with Fr. Probus in the late 1970s and soon became aware of his unique talent as a singer of Syriac chants. In 1999, when I worked on a commercial release of a selection of Syriac songs of the Syro Malabar Church, I requested Fr. Probus to be the lead singer. Thus, the CD, “Qambel Maran: Syriac Chants from South India” (PAN Records, Netherlands, 2002; became a permanent record of the unique vocal inflection of Fr. Probus as well as his memory of many Syriac melodies from the liturgical context other than Qurbana ( the current recording is a worth while supplement to that CD). Earlier, in the 1980s, Fr. Probus and I discussed the possibility of making a studio recording of his solemn Syriac Qurbana. That plan did not materialize. Knowing my disappointment, Fr. Probus shared the audio cassette of this recording. I carried it with me in the subsequent years during my sojourn at various locations in India and the USA.

Fr. Probus spent his retirement years at his favorite place, the St. Joseph’s Monastery at Mannanam, and is buried at the Monastery chapel. The Christian Musicological Society of India is immensely grateful to Fr. Probus for handing down this intangible treasure of Indian Christianity. May he continue to use his voice to sing the Trisagion in Syriac with angels in heaven. We gladly present this recording as an offering to the lovers of Syriac music, church history, and Eastern-Catholic culture around the world. All in all, this may be the most valuable archival material we have so far.