Syriac chants during the Nuptial Qurbana for Abu Alex and Stephy Joy. 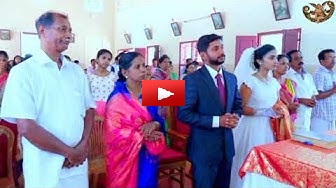 AP 127 - Syriac chants during the Nuptial Qurbana for Abu Alex and Stephy Joy.

Here is yet another video that instills hope in our minds for the future of the Syriac language in India. Abu Alex, a medical professional, developed interest in the Syriac language during his Higher-Secondary- School days, when he took it as a second language purely for academic reasons. Soon he became aware of the sacrality of the Syriac language and the magical effect of the Syriac melodies. Abu attended, whenever and wherever possible, the celebration of the Syro Malabar Qurbana in Syriac. Abu’s association with Koonammakkal Thoma Kathanar and the Marthoma Nazrani Dayra served as an additional source of inspiration. Fast forward, when the time came for his wedding, Abu took a bold decision to include Syriac chants in the Nuptial Qurbana in Malayalam. His bride, Stephy Joy went along with the idea and supported his decision. Abu received ardent support from the Vicar, Fr. Thomas Kizhakkel who recruited young, enthusiastic singers from the Sunday School. Fr. Thomas Thayyil taught them the chants. Thus, what we see in the video is the result of the concerted efforts of many like-minded people. The video portends many possibilities for the upcoming generation. Abu shows that if we make extra efforts, we can open the lid of Syriac music treasures to the younger generation. and that it is all within their reach. The Christian Musicological Society of India is grateful to Abu Alex and Stephy Joy for granting permission to post this video on our channel. We wish them a happy and long married life.