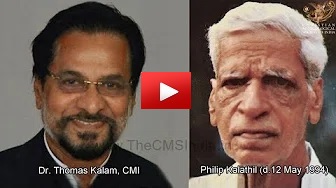 Contrasting views on the vernacularization of the Syro Malabar liturgy (1962). Dr. Thomas Kalam recalls a conversation between his father, Philip Kalathil, who made a special visit to the CMI Novitiate House in Chethippuzha to speak to his son, a CMI novice at that time. Philip's request was to have his son promise that he would not celebrate the Syro Malabar Qurbana in the vernacular.

Dr. Thomas Kalam, CMI, retired professor of Moral Theology at Dharmaram Vidya Kshethram and former Director of St. John’s Medical College in Bengaluru, was kind enough to share his take on the public reception of the vernacularization of the Syro Malabar liturgy. Young Thomas and his classmates, who knew to read and write in Syriac, were thrilled about the possibility of celebrating Qurbana in Malayalam. The response of the older generation, however, was different. The older generation that did not know the nuances of the Syriac language, had developed strong sentiments and emotional affinity to the Syriac language. The most important reason for that emotional attachment was their pride in possessing the sound of the mother tongue of Jesus and the apostles. Although they had only a vague idea about what was going on, they knew that the priest was uttering the exact words that Jesus spoke at the last Last Supper. They wanted to hold on to that sense of mystery and sacrality. Dr. Kalam’s Dad was so upset about the possibility of his son celebrating Qurbana (several years later) in the vernacular that he made a trip to the Novitiate House, got special permission from the Novice Master to speak to his young son and make him promise that he would not celebrate Qurbana in Malayalam. Dr. Kalam, who is a fearless, independent thinker, also spoke about the current status of the liturgical discourses in the Syro Malabar Church that more attention to rubrics and less attention to the unique theology and spirituality that is part of the Syro Malabar liturgy. We are grateful to Dr. Kalam for his candid conversation that may be helpful to future researchers on the transition era in the history of the Syro Malabar liturgy.