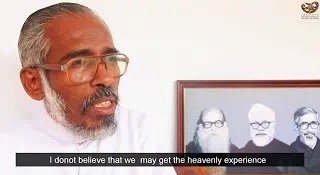 AP 219 - Koonammakkal Thoma Kathanar on the beauty of the Syriac language and music.

Koonammakkal Thoma Kathanar in conversation with Jarly Mathew. The beauty and the relevance of the East Syriac tradition of the Syro Malabar Church See earlier interview at Aramaic Project-16 https://youtu.be/N4cFJYlqZqo

Here is an excerpt from a short and sweet conversation between Jarley Mathew and Koonammakal Thoma Kathanar, an intellectual giant of the Syro Malabar Church. The topic is the greatness of the Syriac language and music that our forefathers zealously held on to for centuries and then just let them go into oblivion by the generation that lived in the second half of the twentieth century. Koonammakkal Kathnar felt the pain and took a bold step to start the Beth Aprem Nazrani Dayra, where the Syriac language and liturgy found a home. It is not clear if his vision will continue to flourish, but we are happy to document his dream in his own words. Syriac liturgy played a significant role in his attraction toward priestly ministry as a young man. He continued his interest and became a consummate scholar in the Syriac language and culture. Thoma Kathanar cherished great appreciation for the efforts of the CMI Congregation in serving the Syriac tradition of the Syro Malabar Church. The Kathanar kept the photo of three CMI luminaries on his table: Fr. John Bosco Thottakkara (aka Guru Yohand 1920-2005, Fr. Placid Podipara, 1899-1985, and Fr. Emmanuel Thelly, 1925-2015). This is the photo we see in the background. Recently, due to ill health, Thoma Kathanar retired from academic activities. We do not know the future of the Dayara. Fortunately, the Kathanar had glimpses of the emerging interest and energized conversations on the Aramaic tradition among the Syro Malabar Catholics' younger generation across the world. Thoma Kathanar was immensely happy to hear about the Aramaic Project, and granted us an extensive interview on 3 August 2014 (Aramaic Project-16 https://youtu.be/N4cFJYlqZqo). That interview has become a valuable educational resource. We wish Thoma Kathanar peace and good health in the coming years. May the good Lord reward him for his zeal for the House of the Lord. Reference: Aramaic Project-16