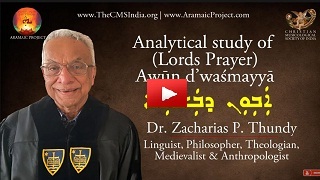 Was the Lord's Prayer lost in translation from Aramaic?: Zacharias Thundy

In 2017, Pope Francis initiated a discussion on the English translation of the Our Father. Religious scholars across the globe were appalled when the Pope proposed a corrective to the centuries-old practice. The Pope asked to change the text, "Lead us not into temptation," to "Let us not fall into temptation." Dr. Zacharias Thundy ( http://christianmusicologicalsocietyo... ), a linguist, philosopher, and medievalist, wrote an extensive article supporting the Pope's idea. The article is available on our digital library. (See http://christianmusicologicalsocietyo...) Dr. Thundy applied linguistic analysis and cross-cultural studies to compare various translations with the source text in Aramaic. The video contains a summary of his arguments. We hope this video will encourage the younger generation among the Syriac Christians in India, especially the Syro Malabar Catholics who follow the East Syriac tradition, to learn the source text of the Lord's Prayer