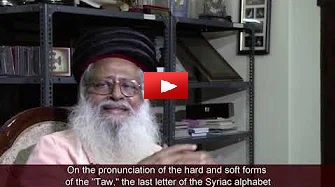 From the arrival of St.Thomas till the coonen cross in 1653 the history of the Indian church is common. Between the 3rd and the 9th centuries there were waves of immigrants from Mesopotamia to Kerala, and from the early centuries, This Church, with its liturgical center in Edessa, had also claimed its origin from St. Thomas. Thus the East Syrian or Chaldean liturgy was used in Kerala until the 17th century. The Syrian Church (using the Syriac liturgy) in Kerala was undivided until the advent of the Portuguese. The Portuguese set up their headquarters in Goa early in the 16th century and extended their domain to Kerala. The Archbishopric of Goa, backed by the Portuguese, claimed jurisdiction over the Syrian Christians of Malabar. The East Syrian liturgy and the Mesopotamian connection of the St. Thomas Christians laid them open to suspicion of Nestorianism and Archbishop Menezes of Goa, who arrived in Kerala in December 1598 was determined to bring them into the Latin way of worship. He convened a Synod at Udayamperur in June 1599. Many decrees of the Synod were aimed at bring the Syrian liturgy and practices into conformity with those of the Latin Rite.

The Syrian Christians around Angamalee who did not accept Mar Gregorius waited for East Syrian bishops as before. Mar Gabriel came in 1701. He died in Kerala in 1731 and was buried in Cheriapally in Kottayam which is under the control of the Indian Orthodox Syrian Church.

The present Metropolitan Mar Aprem, born in 1940, completed 70 years of age on 13 June 2010. His first doctorate thesis was The Study of History, Faith and Worship of the Chaldean Syrian Church in Trichur since 1814 AD. The University of Serampore, India awarded D.Th. (Doctor of Theology) degree in 1976.

The second doctorate for the Ph.D. of Mahatma Gandhi University was The History of the Assyrian Church of the East in the twentieth Century with special reference to the Syriac literature in Kerala. The Holy Apostolic Catholic Assyrian Church of the East and the noble nation of India by the grace of God almighty, have been witnessed and blessed by the historic third Patriarchal visit of His Holiness Maran Mar Dinka IV, the Catholicos Patriarch, along with other 8 prelates of the Church of the East from across the world in order to convene the Holy Synod and holy consecration of two Bishops in India, both the Holy synod and Bishop Consecration for the first time in the history of the church of the east in the Indian soil. The Holy Synod was convened from 13th – 19th January 2010, at the Metropolitan’s palace, Thrissur, the cultural capital of Kerala, is popularly called “God’s own Country” the southern state of India.

By Divine will and unconditional grace, His Holiness Maran Mar Dinkha IV the Catholicos Patriarch of the Church of the East, consecrated the two Arch-Deacons as Episcopas (Bishops) on Sunday 17th January 2010, and thus the country India witnessed one more historical event. Arch Deacon Joju Anto received the name.

The Church of the East in India is using the Liturgy of Addai and Mari. There are two alternate anaphoras. Counting the Addai and Mari as the first anaphora, the second is known as that of Theodore of Mopsuestia (d.428). This is used on Sundays from the Advent season till after the Psalm Sunday. Theodore of Mopsuestia, the Interpreter, wrote this anaphora. This anaphora was translated from Greek into Syriac by Mar Awa Catholicos on the occasion of his visit to the Roman Empire, by the help of Mar Thoma, the teacher of Urhai.

From the Holy Saturday on till the beginning of Advent the first anaphora of Addai and Mari is used. The third anaphora is that of Nestorius. This is slightly longer than the first two anaphora. This third anaphora is used on five occasions namely Epiphany, Memorial of Mar Yohannan Mamdhana, Memorial of Greek Malpans, The Wednesday of the Ba’utha of the Ninevites and Maundy Thursday.

The liturgy has been translated into Malayalam. Most portions of the liturgy are used in the Malayalam translation for the benefit of the worshippers. However most of the priests recite some prayers in the original Aramaic language. The text of the liturgy is printed with two languages.