Complete List of Resources for Researchers
RR-050 to RR-001 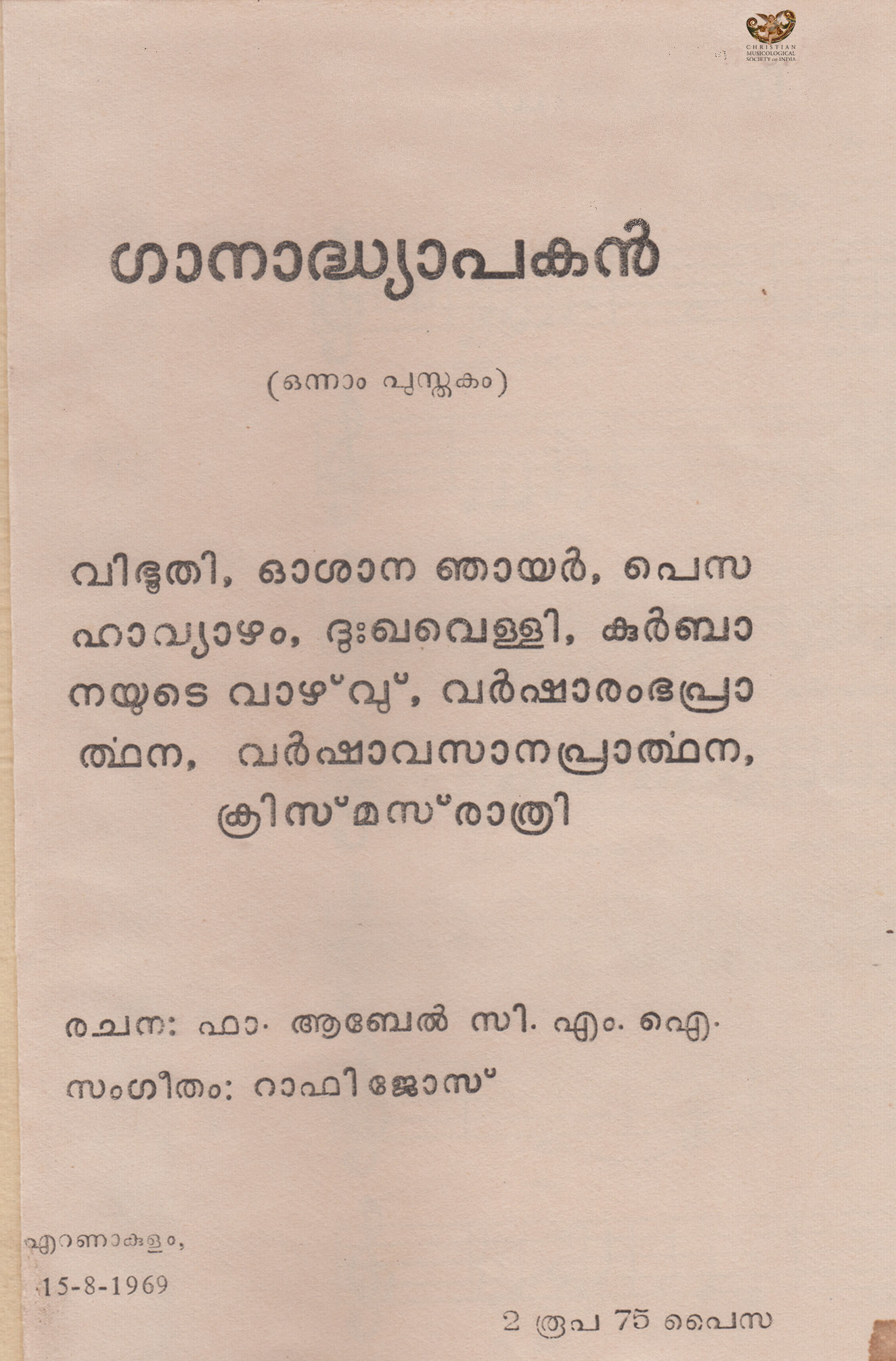 This book is a valuable addition to the resources for researchers on the Christian music of Kerala, India. It tells the story of the meeting of the musical minds of two great men: Fr. Abel Periyappuram, CMI (1920-2001) and Mangalappilly M. Jose (d. 2010), popularly known as Rafi Jose. Their collaboration happened in the 1960s at Ernakulam, Kerala. That was the time of transition of the Syro Malabar liturgy from Syriac to Malayalam. Drawing inspiration from the ancient Syriac liturgical texts, Fr. Abel wrote lyrics in Malayalam for the Holy week services, Benediction of the Blessed Sacrament, Christmas midnight service, as well as prayer services for the beginning and end of the calendar year. This was also the time when Fr. Abel pooled the best musical talents in the greater cochin area and formed the Christian Arts club, which eventually would evolve into Kalabhavan. Mangalappiily Jose was one of those gifted musicians; he had already become immensely popular by singing the Hindi film songs of Muhammad Rafi (hence the nickname “ Rafi Jose). Fr. Abel tested his talent as a composer by entrusting the new lyrics to Rafi Jose. Rafi Jose composed captivating melodies to those lyrics that became instantly popular. (These melodies continue to be sung in the Syro Malabar churches until this day). The gramophone company of India published a record that included two of Rafi’s compositions: “thālathil weḷḷameṭuthu” (for Maundy Thursday) as well as “gāgulthā malayil ninnum” (for Good Friday). These soulful melodies were heard from the public address systems of most of the churches in Kerala and became imprinted in the minds of the people of Kerala.

Meanwhile, Fr. Abel and Rafi Jose embarked on an unusual project of publishing this book (printed at Mar Louis Memorial Press at Ernakulam, in 1969) with the lyrics and music of their songs in Western staff notation. The book is a monument to their great talents, their musical collaboration, and their intention to enhance Western musical literacy among musicians in Kerala.

In the absence of an Introduction, we do not know who transcribed the melody in staff notation. To clarify this, I had a telephone conversation with Rex Isaacs (18 August 2016), who was closely associated with Christian Arts Club and, later, Kalabhavan. Rex is a violinist in the Western tradition and comes from a family of musicians. Rex told me that he assisted Rafi Jose in preparing the score of the melodies of “thālathil weḷḷameṭuthu” and “gāgulthā malayil ninnum” as well as the background music for those melodies, before they traveled to Madras (Chennai) for the audio recording at HMV studio. Rex reiterated that the transcriptions that are printed in the book are not his. He thinks that Mr. Patrick David, who knew Rafi Jose, very likely prepared the score that is printed in the book. Rex added that he could not understand the reason for the addition of a bar line after the time signature on the opening staff, and then a measure-long space and bar line at the beginning of subsequent staves. In any case, the score helps us to understand the melody as the composer envisaged it; it also helps us to understand how a great singer like K. J. Yesudas emotes with and interprets the melody, and gives it a different life.

I happened to see the book, by chance, during a visit to the music library at Nadopasana at Thodupuzha, that I started in 1986. This was in the first week of August 2016. While browsing through the collection of recordings and books, Fr. Kurian Puthenpurackal,CMI, the director of Nadopasana brought a set of books from his personal collection. Gānādhyāpakan was one of them. I was overjoyed to see the book, and immediately recognized its historical value. Fr. Puthenpurackal said that he got the book from Fr. John Kachiramattom, CMI several years before. Ironically, this book and its content never came up in my conversation with Fr. Abel, during my three years at Kalabhavan.

The book assumes another layer of importance at the present time. It offers a definitive answer to the recent disputes regarding the authorship of the melody of "gagultha malayil ninnum " The dispute arose after the publication of an article (“gāgulthā malayil ninnum”), on Rafi Jose by Shajan C. Mathew in the Sunday edition of Malayala Manorama Daily, on March 27, 2016. In the article, Shajan Mathew cited much evidence to support the authorship of the melody by Rafi Jose Another living composer, however, disputed Shajan’s findings and claimed authorship of the melody. The Christian Musicological Society of India gladly presents the pdf version of the book for the benefit of scholars and journalists as the final proof of the authorship. May the soul of Rafi Jose have the last laugh, and rest in peace!