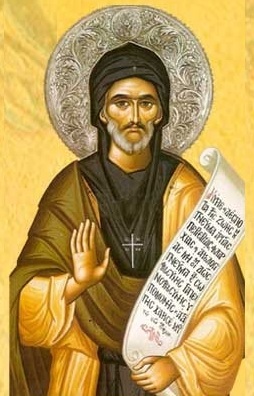 Brief Life History - A great poet, teacher, orator, and defender of the faith, Ephrem is the only Syriac Christian recognized as a doctor of the Church. He took upon himself the special task of opposing the many false doctrines rampant at his time, always remaining a true and forceful defender of the Catholic Church. Born in Nisibis, Mesopotamia, he was baptized as a young man and became famous as a teacher in his native city. When the Christian emperor had to cede Nisibis to the Persians, Ephrem fled  to Edessa. He is credited with attracting great glory to the biblical school there. He was ordained a deacon but declined becoming a priest.  He had a prolific pen, and his writings best illumine his holiness. Although he was not a man of great scholarship, his works reflect deep insight and knowledge of the Scriptures. In writing about the mysteries of humanity’s redemption, Ephrem reveals a realistic and humanly sympathetic spirit and a great devotion to the humanity of Jesus. It is said that his poetic account of the Last Judgment inspired Dante. It is surprising to read that he wrote hymns against the heretics of his day.  Ephrem became one of the first to introduce song into the Church’s public worship as a means of instruction for the faithful. His many hymns have earned him the title “Harp of the Holy Spirit.” Ephrem preferred a simple, austere life, living in a small cave overlooking the city of Edessa. It was here that he died around 373. 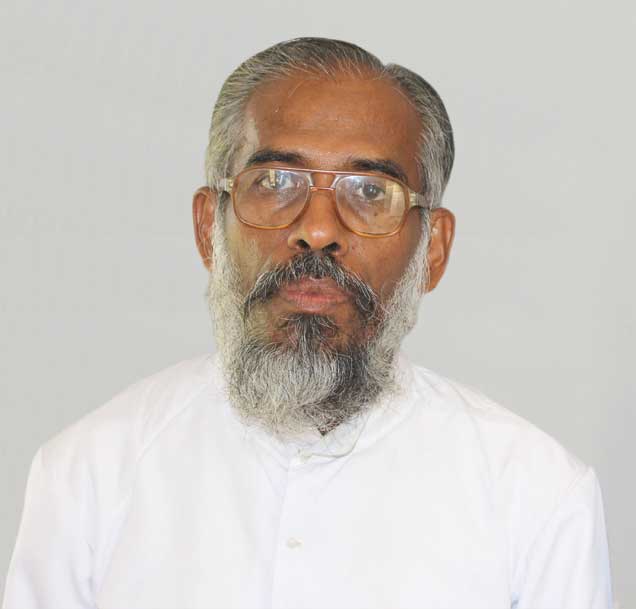 Since 324/25, Mar Aprem served as the principal teacher at the Theological institute in Nisibis (in Turkey on the Syrian border). This was a miraculous phenomenon because Mar Aprem never had formal education. Nevertheless, he expounded leading theological thinking of the time through (Syriac) poetry. He proved that poetry is the best means of conveying theology. Mar Aprem is on par with Kalidasan in Sanskrit and Shakespear in English. There is no one like Mar Aprem in the entire Christian world. He was the first choirmaster of the Church. In those days, female singers had no place in the Church. He formed a choir of young women and taught them theological songs. Those women took the songs to their homes and their neighborhoods. That is how catechesis took place. Nobody did such things in those days. He lived his religious life amidst the people. After resisting ecclesiastical authorities' attempts to ordain him a bishop, he lived and died as a deacon (so goes the legend). By the way, to be a deacon in those days was not a small affair. What was important was fulfilling the duties of that status of life that each one chose. Hierarchical status was less significant. He taught at Nisibis until 363. Then, the political situation changed. He was forced to leave Nisibis, relocate to Edessa (Urha), and lived there for ten years, during which his name became popular in the Greek world. St. Jerome writes about Mar Aprem in 393, nineteen years after death.

In those days, only Greek was the language of theology. In contrast, the Greeks began to write about St. Ephrem, who wrote theology in Syriac. This was unprecedented. The Cappadocian fathers, Gregory of Nazianzus (329-389), Gregory of Nyssa (c. 335-c.395), and Basil the Great (330-379) reigned as the most prominent theologians. Mar Aprem, who never attended a school, became more prominent than them. We hear a lot about St. Augustine as the founder of the European theological thinking. Our theology started with Mar Aprem and continues through our prayers and songs, not through Europe by way of Augustine, which led to Protestantism and theological disputes and disunity in the Church. Mar Aprem, on the other hand, is a man of unity. The language of theology is the language of prayer.

Mar Aprem did not consider theology as an intellectual exercise. Theology is a practical study of various aspects of living the faith; it is based on the sacred scripture, a continuation of the Apostles' teachings. It is not a book that people write using their intellectual application to write books on philosophy or literature. Such a style evolved in Europe because they moved away from the world of Mar Aprem. Bring back Aprem; the Church should go back to the fourth century, can become one with the Syriac Church, the Greek Church, and the Latin Church. The books of Aprem, not just his biography, should be taught. His thoughts are abstractions from the sacred scripture and not a theology that came about from human imagination. His pedagogy is divine. That is why he is referred to as the harp of the Holy Ruha, the second Moses. No one received so many epithets as the full vessel of knowledge, Euphrates of the Church, second Moses, Comparable to Prophet Elia in the Old Testament, the prophet of the Syriac people, the sun of Syriac people. We do not see anything similar in the history of the Church. No other saint has these many attributes. No one has written so much about the Virgin Mary.

A seventy-six-year-old professor of Indian philosophy from Pune reached out to me after reading my interpretations of Mar Aprem's writings from the fourth century. He asked me to throw away the comparisons to the writings of Sankaracharya. The similarities may not be original to Sankaracharya. He might have borrowed them from Mar Aprem. How do you account for the similarities between the teachings of Mar Aprem and the Psychology professors who lived in the nineteenth century? That is because Mar Aprem's vision was prophetic, beyond the boundaries of the fourth century. There are similarities between the visions of Paul, Who lived in the twentieth century. How did it happen? A man who lived in the fourth century was a genius, an intellectual giant. Although he did not have formal education, the visions that God granted him outlived the ages. Therefore, his works are compared to an ocean of invisible boundaries. The compilation of his works is larger than the Mahabharath. Only is a fraction of his works are extant. If the Mahabharath has one hundred thousand verses, Aprem's works amount to three hundred thousand verses. There is no other human being who has grasped the essence of the sacred scripture.

He is one of the rare Fathers of the Church who can stand in comparison with the Apostles.

Albeit the importance the contemporary generation gave him, even though Aprem laid the foundations of the prayers of our Church, we have not been able to connect with the treasures that he bequeathed. That is why we failed to know Mar Aprem. Mar Aprem or his disciples are the sources of prayers in our liturgy of the Hours, sacraments, and Qurbana. Because he was a man of prayer and capable of interpreting theology in the layman's language, he could transform the way of thinking against the Church in Edessa in a matter of a decade. 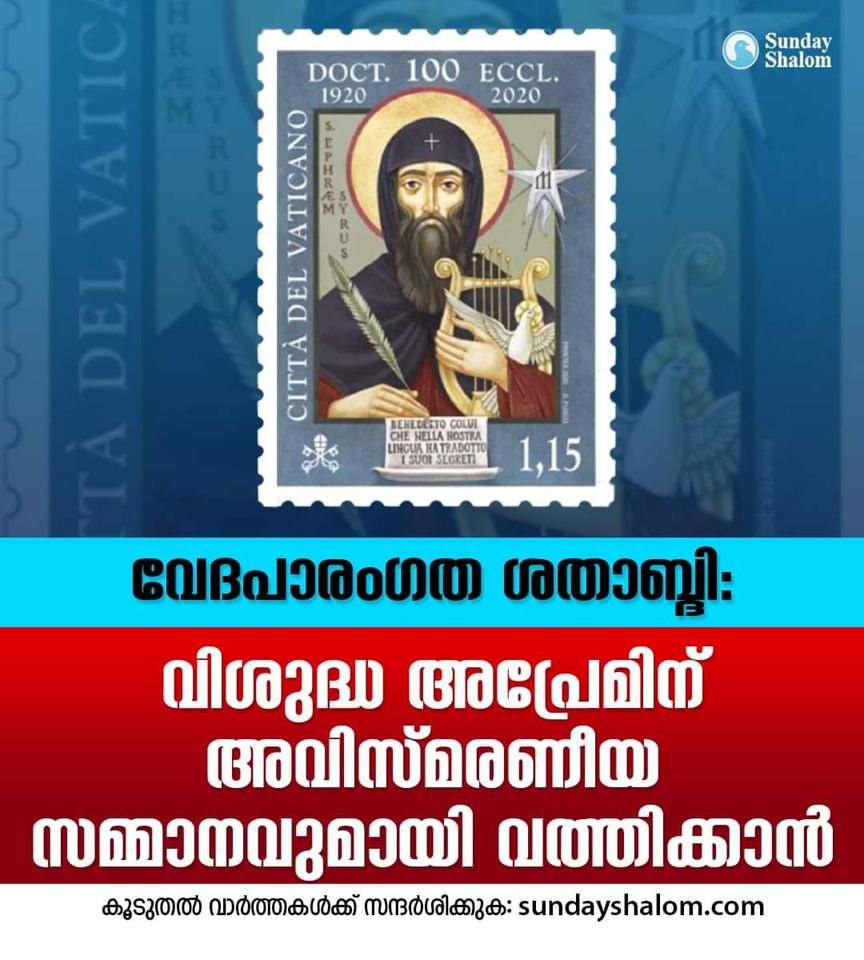 Hymns and Prayers of St. Ephrem

Click here to read More...
Hymn of Light, Saint Ephrem the Syrian, the Doctor of the Church 306- 373


The Light of the just and joy of the upright is Christ Jesus our Lord.

Begotten of the Father, He manifested himself to us.

He came to rescue us from darkness and to fill us with the radiance of His light.

The day is dawning upon us; the power of darkness is fading away.

From the true Light there arises for us the light which illumines our darkened eyes.

His glory shines upon the world and enlightens the very depths of the abyss.

Death is annihilated, night has vanished, and the gates of Sheol are broken.

Creatures lying in darkness from ancient times are clothed in light.

The dead arise from the dust and sing because they have a savior.

He brings salvation and grants us life. He ascends to his Father on high.

He will return in glorious splendor and shed His light on those gazing upon Him.

Our King comes in majestic glory. Let us light our lamps and go forth to meet Him.

Let us find our joy in Him, for He has found joy in us.

He will indeed rejoice us with His marvelous light.

Who, in an outpouring of love, sent Him to us, to fill us with hope and salvation.

When He manifests Himself, the saints awaiting Him in weariness and sorrow,

will go forth to meet Him with lighted lamps.

The angels and guardians of heaven will rejoice in the glory of the just and upright people of the earth;

together crowned with victory,

they will sing hymns and psalms.

Stand up then and be ready! Give thanks to our King and Savior,

Who will come in great glory to gladden us

with His marvelous light in His kingdom.

The Prayer of St Ephrem demonstrated, along with how to make the sign of the cross, and do a prostration.