Nazrani Brahmins of Kerala, from a legal point of view. Prof. Zacharias Thundy 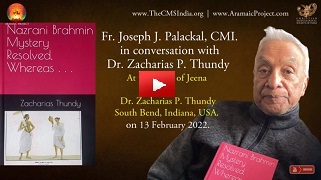 A critical inquiry into the Indian version of early Christianity. See Note

Prof. Zacharias Thundy, an astute scholar and intellectually honest researcher presents a provocative thesis that the Nazrani Brahmin myth is a legal possibility. Thundy's life-long study of the Hindu and Christian Vedas enlightened him to make such bold statements as we hear in this video and the forthcoming video on Sankaracharya. In the First century of the Christian era, the local kings in South India accepted the incoming faith and its Vedas, especially, the fourth Gospel, which talks about rebirth (being born from the head). Later the Christian immigrants from West Asia received warm welcome from the kings on the west coast of Kerala, based on their claim that they were twice born through the rite of Baptism. History and folklore inform us that these Christians enjoyed upper caste privileges and great respect from the local people. For that reason, we do not hear stories of persecutions of Christians in this part of the world.
Prof. Thundy explains in detail the legal argument in his book, “Nazrani Brahmin Mystery Resolved, Whereas…”. The book is available on Amazon. The video shows his arguments in a nutshell. We hope the video will inspire scholars on Kerala Christian history to take up on Thundy’s arguments and generate an all-new conversation on early Aramaic Christianity in India.