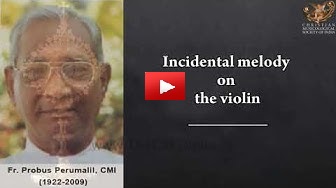 Fr. Probus Perumalil, CMI (1922-2009) decided to include the hymns of the Benediction of the Blessed Sacrament in the recording he made of Solemn Qurbana in Syriac. Fr. Probus made this recording on a cassette tape recorder, sometime in 1980. These songs were at the end of side B of the cassette (see notes on Aramaic Project-119). This is the earliest audio sample we have of this category of hymns. Thus, this is yet another golden treasure along with the recording of Solemn Qurbana by the same group. The violinist and the harmonist decided to play two incidental melodies on their respective instruments. The Catholic St. Thomas Christians adopted the ritual of the Benediction from the Roman Catholic rite, probably, soon after the Synod of Udayamperoor (1599). Someone in Kerala, who knew both Latin and Syriac, translated the Latin text into Malayalam and composed new melodies for the translated version. Most probably, Bishop Francis Roz, S. J. (1559-1624) was an active participant in this process. The Benediction in Syriac was part of the Sunday liturgy among the Syro Malabar churches, until the 1960s. Currently, Benediction takes place only on special festival occasions. The accompanying chants are in Malayalam. ( Fr. Albert Saldanha, S. J.) included several Syriac tunes (in staff notation with Syriac text underlay in Malayalam script) for the Benediction in his monumental work, “” (Syriac Malayalam Hymnal).