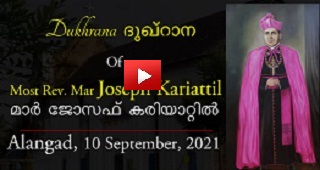 Syriac chant, "Qambel Maran" during Office for the Dead in Malayalam.

Dukhrana of Mar Joseph Kariattil (1742-1786), the First Indigenous Metropolitan Archbishop of St. Thomas Christians in Kerala. Kariattil Mar Ouseph ( Mar Joseph Kariattil) was the first native Indian to be appointed as Metropolitan of Kodungalloor (Cranganore) for Syrian Catholics in the territory now comprising Kerala, India Kariattil Malpan took great efforts for the reunion of the Saint Thomas Christians (also known as Syriac Christians or Mar Thoma Nazranis) who had split following the Coonen Cross Oath (1653). He made the historic journey to Rome in 1778 together with Paremmakkal Thoma Kathanar to represent the matter with the church authorities. Impressed with the humility, personality, religious zeal, and intellect of Kariattil Joseph Malpan, he was appointed as the Archbishop of Kodungalloor at Lisbon on 16 July 1782. On 17 February 1783 he was consecrated as Archbishop of Cranganore (Kodungalloor). . On 16 December 1782 Pope Pius VI confirmed his appointment as Metropolitan Archbishop of Archdiocese of Kodungalloor, thus imprinting in the history of the Archdiocese as the first native Archbishop of Mar Thoma Nazranis of Malankara. On 17 March 1783, he revived the scared Pallium of Metropolitan Archbishop from Pope Pius VI. At the same time, he also received all the privileges and authority to unite Mar Thoma VI and the Puthenkoor faction to Catholic Church. However, on his way back to India, he died at Goa on 10 September 1786. He was buried there and later his mortal remains were transferred to Alangad and were re-interred at St. Mary's Syro-Malabar Catholic Church, Alangad in 1961.