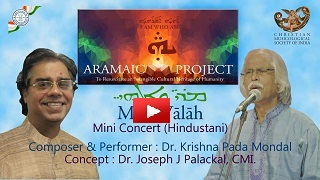 Opening a new chapter in the history of Hindustani Classical Music and Aramaic(Syriac) Chant traditions. Note This video marks the tenth anniversary of launching the Aramaic Project, which started to preserve an intangible cultural heritage of humanity in India. Here we see a Hindustani classical music concert with Christian text in the ancient Aramaic language, for the first time. The Aramaic language and Hindustani music have a shared geographical connection to West Asia. Besides, Aramaic was one of the languages in the Edicts of Emperor Ashoka (coronation, c. 268 BC). The concert consists of just two words, Mār Wālāh (“My Lord and My God”) that St. Thomas the Apostle uttered in amazement at seeing the resurrected Jesus. The Apostle acknowledges Jesus as both man and God (John 20: 28), a profound profession of faith. For that reason, Mar Walah is the favorite Mantra of the St. Thomas Christians both in India and the Middle East. Remarkably, the performer-composer ingeniously explores multiple ways to articulate the words to conduct a musical meditation. In this meditation, prayer and aesthetic enjoyment intersect against the infinite shruti emanating from the two tanpuras. The Aramaic words blend themselves easily into the melodic contours of the raga. Dr. Mondal seamlessly laces the English translation into the performance.

A Hindustani classical music concert with a Christian theme is new; Dr. Mondal shows us that music is an areligious combination of sound and silence, a medium to express any religious sentiment from any cultural background. The performer's goal is to take the listeners from the world of sound to the cave of internal silence and the realm of the ultimate reality beyond religion. Words divide; silence unites.

The choice of Raga, too, is remarkable. The pentatonic Hamsadhwani (Sa-Ri-Ga-Pa-Ni-Sa/Sa-Ni-Pa-Ga-Ri-Sa) is believed to be of South Indian origin. The buoyant character of the Raga matches the mood of exuberant acclamation of the divinity and humanity of Jesus by the Apostle of India. Prof. Krishna Pada Mondal is a mature musician who is bold enough to take a risk and brave enough to break the centuries-strong barriers of language and religion in classical music. The last time India witnessed such a transformation was during the rule of Akbar the Great (1556-1605) when there was a transition in Hindustani compositions from Sanskrit to Hindi. The intercultural interactions that took place at the court of Akbar included the introduction of Western Christianity by the Jesuit missionaries. Many famous paintings with Christian themes are witnesses to this dialogue. However, the legendary court musicians of the period have not indicated any interest in Christianity, Eastern or Western. Hence the importance of this epoch-making video. The Christian Musicological Society of India is immensely grateful to Prof. Krishna Pada Mondal and his team of accomplished artists for accepting the challenge to add a new chapter to the history of Hindustani music.

Significantly, the video portends immense possibilities for future composers in creating a new genre of music and a different way of theologizing in India. We sincerely hope Hindustani music connoisseurs in India would discover Prof. Krishna Pada Mondal, who continues to cherish the knowledge and memories he acquired at his Alma Maters, the Depts of Music at M. S. University of Baroda, and Benares Hindu University, Uttar Pradesh, India.

Classical music and spirituality are two dimensions and manifestations of divine presence in humans.......-Mathew Nampudakam, 05 July 2022

Classical music and spirituality are two dimensions and manifestations of divine presence in humans. Few got the gifts to realise, relish and cherish it. Music has no religion so is experience of God. But there are some catalysts who have thier life dedicated to help the uninitiated to lead them to this God experience. Here are two such great innovators in Dr Palackal and Dr Mandal whose combined ingenuity brought together a rare masterpiece for the posterity. I am not surprised that Dr Palackal has masterminded this event, with his over 40 years of musical experimentations in classical and folk music. On this Aramic and Hindustani classical combination he has opened up a so far untrodden path. We await greater and deeper inputs and outcomes in the days to come. Choosing a pleasant Raga, Hamsadwani was very appropriate. My best wishes will always be with these adventurers who have set their vision high. - Mathew Nampudakam, 05 July 2022

what a beautiful program, what a great work and contribution to India and its Christianity on St. Thomas day, the day of Indian Christianity. Thank you and all the participants and all who worked behind this project many many thanks, praising and praying to Apostle Thomas - Rani, 03 July 2022

Listened to the full version on YouTube now. It’s well done! Your introduction made it contextual.
Big milestone in your Aramaic project. - Thadeus Aravindathu, 03 July 2022