Complete List of Resources for Researchers
RR-200 to RR-151 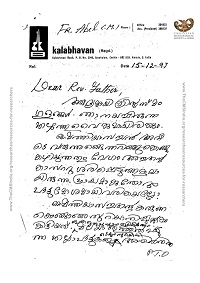 Here is the digital copy of a first-class relic in the beautiful handwriting of Fr. Abel Periyappuram, CMI (1920-2001), who played a pivotal role in the gradual transition of the liturgy of the Syro Malabar Church from Syriac to Malayalam in the 1960s. These pages contain the text of a total of 28 chants in the Malayalam script. Nineteen of those chants are in Syriac and nine in Malayalam. Fr. Abel wrote down these chants in preparation for an audio recording. The recording took place at the Kalabhavan recording studio in the second week of December in 1997.

Fr. Abel did the recording in response to my request. By early 1997, I had decided on the topic of my doctoral dissertation: “Syriac chant traditions in India” (Palackal 2005). To represent the East-Syriac part of the tradition, I chose to study the model melodies that are currently in use in the Hours of the Syro Malabar liturgy. It was Fr. Abel , with the help of Fr. Ludovic Kunianthodath, CMI (1888-1979), who prepared the Malayalam version of the Hours. In the process, Fr. Abel made a choice that had a far-reaching effect in the history of Christian music in India. Fr. Abel decided to retain the original melodies of the Syriac text and adjust the vernacular text to the meter and contours of the melodies of the original Syriac text.

Out of the Several Syriac melodic patterns, Fr. Abel chose twenty-three model melodies and used them in the translated texts of the Hours. I wanted to include a transcription of these melodies in staff notation (see chapter six in my doctoral dissertation). The best source was Fr. Abel himself. I requested Fr. Abel to prepare a recording of the melodies in his voice. We had known and respected each other since my seminary days. After my music studies in Baroda, Fr. Abel invited me to join him at Kalabhavan as Dean of Studies. In fact, it was Fr. Abel who suggested the idea of my going for higher studies in America with the understanding that I would take over his responsibilities in due course (obviously, that did not happen).

Fr. Abel agreed to make the recording. He copied down the text from a Syriac breviary that he borrowed from Fr. Mathias Mundadan, CMI who, at that time, was in the process of establishing a library in honor of the saintly Palackal Thoma Malpan. Fr. Abel used the manuscript to sing at the recording studio.

Fortunately, after the recording Fr. Abel did not discard the pages, instead kept them safe and handed them over to me. He also wrote a letter to me with a few comments on the chants. The letter is dated 15 December 1997. Interestingly, Fr. Abel wrote the chant texts on the blank-side of unused flyers announcing a public event that Kalabhavan organized to honor him. Fr. Abel cut the flyer into two equal halves of 14.5cms x 22.5 cms (Using the scrap paper was one of the many ways in which Fr. Abel practiced his vow of poverty). The personal letter, however, was written on the official letterhead of Kalabhavan (14cms x 22.5 cms).the letter contains an in important piece of information on the rhythmic aspect of Syriac and Malayalam versions of chants. Fr. Abel writes, പൺട് നമ്മൾ സുറിയാനിയിൽ പാടിയിരുന്നപ്പോൾ താളം പാലിച്ചിരുന്നില്ല. മലയാളത്തിലായപ്പോൾ കുറെയൊക്കെ താളമുൺട്.“In the past when we used to sing in Syriac, we did not keep rhythm. In the Malayalam version, we keep rhythm to some extent.” In two simple sentences, Fr. Abel hinted a topic of a comparative/analytical study of the application of rhythm in the Syriac and Malayalam versions of chants.