" Palackal Thoma Malpan, the founder of the TOCD [CMI] Congregation " 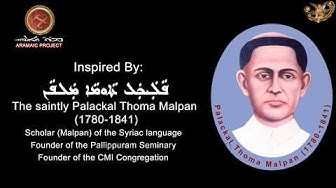 " Palackal Thoma Malpan, the founder of the TOCD [CMI] Congregation "

Rev. Dr. Thomas Kalayil, CMI reads from a manuscript from St. John’s Monastery (CMI) at Mutholy, in the Kottayam district of Kerala. The anonymous author wrote in 1918 a concise history of the Malpanate (system of priestly formation among the Catholic St. Thomas Christians). The writer refers (pages 2-3) to Palackal Thoma Malpan as the "adisthanakkaran" (founder) of the Religious Congregation of the Third Order of the Discalced Carmelites (TOCD [CMI]). The author further refers to Palackal Malpan as "’our Father’ [of our Congregation], and the founder of the Mannanam monastery and the Seminary there.” The manuscript shows how the members of the Congregation regarded Palackal Malpan with high esteem and devotion. This was eighty-seven years after the laying of the foundation of the mother house at Mannanam (1831), and sixty-three years after the first eleven fathers canonically professed their religious vows (1855). Thirteen years after the writing of the manuscript, the Congregation celebrated its centenary (1831-1931) with great fanfare. The official publication of a carefully crafted Centenary Souvenir was the highlight of the celebration. The first chapter in the Souvenir describes in detail the origin of the Congregation. The title of this chapter is interesting: “The Two Founders of the Congregation: The Beginnings of the Mother-House” (see the PDF version of this Souvenir here: )

Here the Congregation first acknowledges the role of Palackal Malpan (p. 11, paragraph 4) as the originator of the concept of a religious congregation for the Catholic St. Thomas Christians in Kerala. Also, paragraph 5 (page 12) describes the role of Fr. Thomas Porukara, who happened to be a close friend of Palackal Malpan, in assisting to materialize the original vision of Palackal Malpan. The contents of two documents corroborate what Saint Chavara Kuriakose Elias, an eyewitness, wrote in his Chronicle (Nalagamangal). Saint Chavara included a biography of his adopted father and revered Guru, the saintly Palackal Thoma Malpan in the Chronicle. Saint Chavara concludes the biography by referring to Palackal Malpan as the Foundation of the Congregation” (kowenthayute thutakkam). Ironically, all these documents are a corrective to the current narrative about the founding fathers of the CMI Congregation.

The manuscript is currently at the archive at the Dharmaram College Library. See also the comments by Koonammakkal Thoma Kathanar: