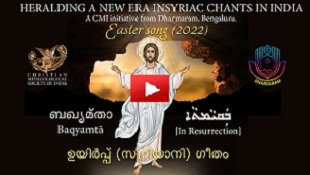 A CMI initiative from Dharmaram, Bangalore.
In this video, we witness the beginning of a new chapter in the ancient history of Syriac chants in the Carmelites of Mary Immaculate (CMI). They wrote new lyrics in Syriac and composed melodies for them. We posted several of their songs earlier. The most significant among them is probably the St. Thomas chant in Aramaic Project- 240A https://youtu.be/eP3-pSyeIKY.

A few priests in Kerala tried to write Syriac chants for liturgical use until the twenty-first century. A prominent example is the acrostic hymn that Fr. Chandy Kadavil (1588-1673) wrote on the theme of the Eucharist. Fr. Kadavil wrote the chant to the melody and meter of an earlier chant (Sagdinan Mar, see 'Sagdinan Mar' (aramaicproject.com)) that was already popular among the Syro Malabar Catholics in Kerala. Later, in the twentieth century, Fr. Emmanuel Thelly, CMI wrote Syriac poems on different themes. In that case, too, Fr. Thelly wrote the lyrics to the existing meter and melody. The lyricists of this chant followed the heptasyllabic meter that is popular in Syriac poetry. Instead of singing the text to existing melodies of heptasyllabic texts, Fr. Cyriac Madathil, CMI, who acted as a guide to the seminarians, asked me to compose a new melody for the text as we did earlier for St. Thomas Chant. Prince Joseph, a music arranger from Kerala, embellished the voice track by incorporating Middle Eastern sonorities into contemporary keyboard arrangements.

Bro. Joby Vadayattukuzhy, CMI, the singer in this video, has a unique voice that invokes a peaceful serenity. Bro. Joby has proven his talent in the audio-recorded version of several Syriac chants, including the St. Thomas chant (https://youtu.be/eP3-pSyeIKY).

The Christian Musicological Society India is glad to be a part of this unique venture.