PAILY VATHAPPALLY ON THE LIFE OF A CHURCH MUSICIAN IN THE SYRIAC ERA . 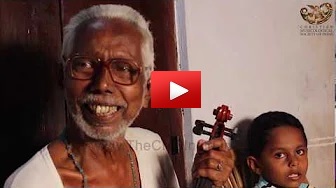 AP 182 - PAILY VATHAPPALLY ON THE LIFE OF A CHURCH MUSICIAN IN THE SYRIAC ERA .

Paily Vathappally, retired church musician at St. Mary's Forane Church at Pallippuram, Cherthala, in a candid conversation on the life of church musicians in the Syriac era. Interviewed at his home on a hot humid and rainy day in July.

We are delighted to have captured a few moments from the life of a dedicated church musician, who started his service at about the age of ten. Mr. Paily Vathappillil (aka "Kunjettan") served the St. Mary's Forane Church (my native parish) at Pallippuram for over half a century. Paily came from a family of church musicians. His father, who was the choir leader at the same church for many years, initiated Paily at the tender age of ten. As years went by, Paily learned to accompany himself on the violin as well as harmonium. Paily was blessed with a powerful baritone voice that could reach a large audience without the aid of amplification. Such a voice culture, which used to be the characteristic of bel canto opera in Italy, happened to be the trademark of singers/actors in the foot-stamping dance drama (chavittu natakam) in Kerala. Such a voice culture is not in vogue anymore among both singers of sacred songs as well as secular songs. The four tracks in the CD, “Qambel Maran: Syriac Chants from South India,” see more about it below) that was recorded in 2000, is a testimony to Paily’s powerful voice. In this recording, which took place at his home on a hot, humid, rainy day, however, Paily sings in a subdued voice. A few years before the recording, Paily had become sick and had retired from singing in the church. Paily's generation saw their music ministry more like a mission than as a means of livelihood. On the one hand, the idea of a living wage had not dawned on the church authorities, yet. On the other hand, such singers as Paily considered an honor to serve the liturgy in their parish and sought different ways to support their families. Paily never complained; instead, he served with a smile. There was an air of nobility in his demeanor. Paily’s grandson, Paul Joy, sat quietly and seemingly disinterested during the recording session. When it came to singing his favorite Marian hymn, B’eda dyawman, Pual Joy came in front of the camera. It is a blessing to have his rendering of the hymn in the Aramaic Project archive. Toward the end of the interview, Paily recalled the older melody of B’eda dyawman and sang and played it on the violin. This is the melody that the sacristan of the St. Mary’s Forane Church taught me when I was about nine years of age. I made my singing debut with this song. Later, I sang it for the CD, Qambel Maran (see note on track 29, in “Qambel Maran: Syriac Chants from South India,” PAN Records, Netherlands, 2002). Listening to Paily was for me an emotional journey back in time. In 2000, I recorded four Syriac chants in Paily's voice for the CD, Qambel Maran: Syriac chants from South India (see notes on tracks 19, 27-28). At the end of the video recording, we said goodbye with the hope to meet and again and document more songs from his memory. Unfortunately, God called Paily for his eternal reward before my next trip to Kerala. May he continue to sing with angels in heaven in the Syriac language, the language of Jesus, Mary, Joseph, the Apostles as well as the angels.